I have never had the opportunity to photograph Hummingbirds before, so when I arrived at the Blue Waters Inn on Tobago I was delighted to find Hummingbird feeders right outside my room - basically a standard RSPB style feeder with perches, but rather than peanuts and wire, a sugar solution in a plastic bottle with drinking holes. In an ideal world there would have been Heliconias and other amazing tropical plants, and indeed this is what pro Hummingbird photographers will use, but with birds almost constantly at the feeders, I was more than happy simply to try and get the birds on film.

It was very difficult; the following images are the best out of many hundreds. Most were blurry, many didn't feature birds at all and were just empty air. Anyone that thinks that having top drawer kit makes such photos routinely possible should think again. I have not sworn as much for a very long time - the birds move like you would not believe - the successful images were almost always where the Hummingbird hovered for more than a split second and I was actually able to achieve focus and fire off a few frames - and bear in mind that as I was using flash, albeit a single flash - the recycle time was such that only the first frame in a sequence was likely to be any good.

So, if you read this post on my birding blog, you'll see that I finally discovered how flash photography works. You can see how this would be ideal for Hummingbird photography. In a nutshell, the genius Hummingbird photographers will set up a scene with a nice flower, and all around it set up multiple flashes on dedicated stands, including one specifically to light the background. They'll shoot entirely on manual, with a deep depth of field, an evenly lit bird, and a flash-induced shutter speed into the realms of 1/20,000th of a second. They still have to achieve critical focus (and I'd like to think they find it as hard as I did!) but essentially that's the only hard part. If the manual exposures are dialled in correctly for the distance, the bird will be perfectly frozen and perfectly lit, with a fabulously lit OOF background. Not easy by any means, but at least possible. I only discovered how flash output power is actually flash output length at the end of my stay, and with only one flash I found that my minimum working distance just wasn't enough to light the bird purely with flash as I wanted. I got all sorts of ghosting if I allowed ambient light to influence the scene, and a darkish image if I didn't. 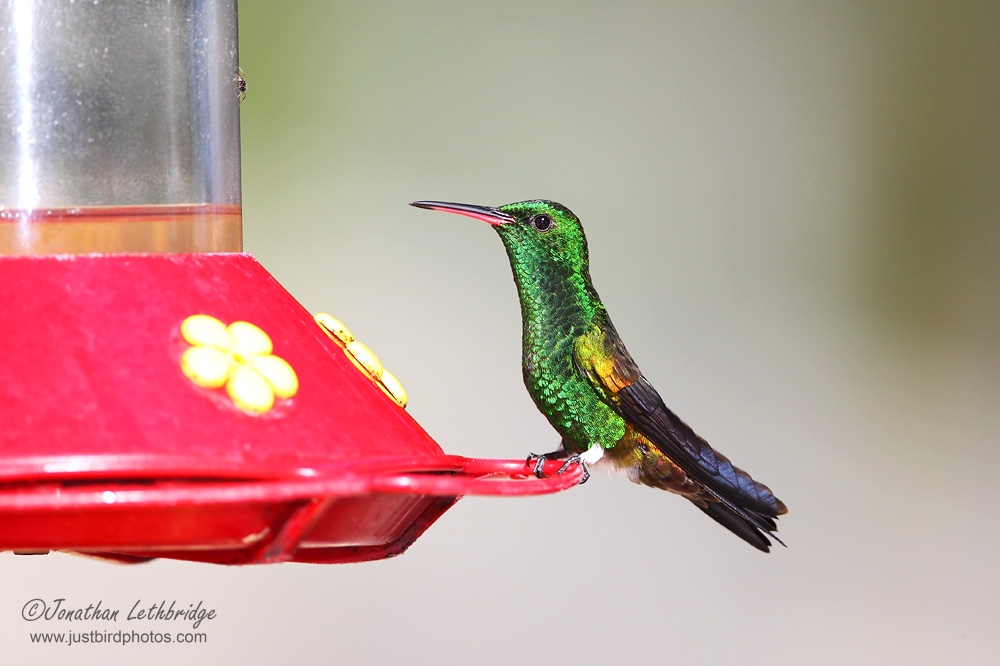 Here's what I did instead. I set up my tripod at the minimum focussing distance for my lens from the feeder, about six metres. I mounted the 800mm lens on the Wimberley Sidekick, and using a multi-jointed macro arm (that I once dreamt of using for amazing macro photos but never in fact used), positioned the 580 EX II about 20cm above the lens axis using a flash extension cord - i.e. the flash does not sit atop the camera, but rather by itself above the lens. Having the light source in a slightly different plane from the lens eliminates red-eye - yes birds get red-eye too! I used a Better Beamer to better align the flash output to the focal length as most flashes top out at around 100mm - another piece of previously redundant kit that has finally proved its worth - all photographers have heaps of unused gear lying around.... 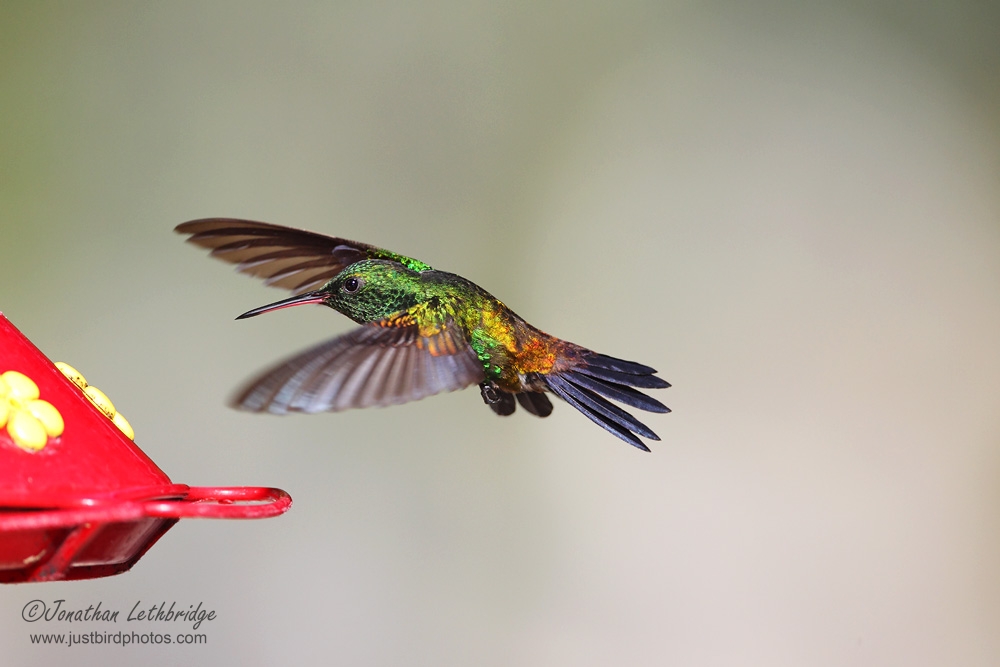 I set the camera to AV exposure mode, and the flash to on - on full power, although I used Flash Exposure Compensation to play around with the light - unfortunately the EXIF doesn't tell me what FEC was used, only if the flash fired or not. I used the centre focus point only, and waited for full sun to hit the feeder to achieve a high shutter speed. When focussing, I aimed for the head - having the eye of the bird in focus is 100% essential in all types of bird portraits. I tried to set an aperture of smaller than f5.6, but more often than not was forced to come back to f5.6 to get a decent shutter speed that I hoped would freeze the wings - it never did. Apparently Hummingbird wings won't even be frozen at 1/8000th of a second, so my puny speeds of 1/2000th were hopeless. Not knowing this I perservered all week! Then it was a matter of focussing on the feeder, and hoping that a bird would hover to the right of the feeder momentarily before alighting to have a drink. This didn't happen often, and usually I screwed it up. You can see the feeder in the above photo - note that it's possible in Photoshop or similar to completely erase the feeder from any photo if you have a nice even background, but that it's best (and less time-consuming!) to aim further out to make that unneccessary. My background was a path; I would have loved a nice green hedge, but the path was all there was - any other shooting angle and I had the walls of the hotel about a foot from the feeder and a diffuse background was completely impossible. In the penultimate photo in this sequence, the partially blue and orange background is another hotel guest walking along the path about ten metres away - you take what you can get! This is another reason to use a completely bespoke set-up if you can, as you can control every last element of the scene.

I used my 800mm lens for every shot. It focusses unbelievably quickly, a triumph of engineering. Similarly, my EOS 1D Mark IV body is one of the quickest there is. Hummingbirds however are quicker - a lot quicker!! More often than not, around 99% of the time, the photo was a blur, despite the quality of the kit, it just could not lock on quick enough. I tried manual focus, essentially presetting a distance and hoping, but at minimum distance and at generally maximum aperture, this never worked, so I returned to autofocus. Occasionally it worked, and what follow are the best results - where the camera locked on, where the speed was adequate, where the flash mostly fired, and where the wings didn't obsure the head - this latter is pure unadulterated luck! 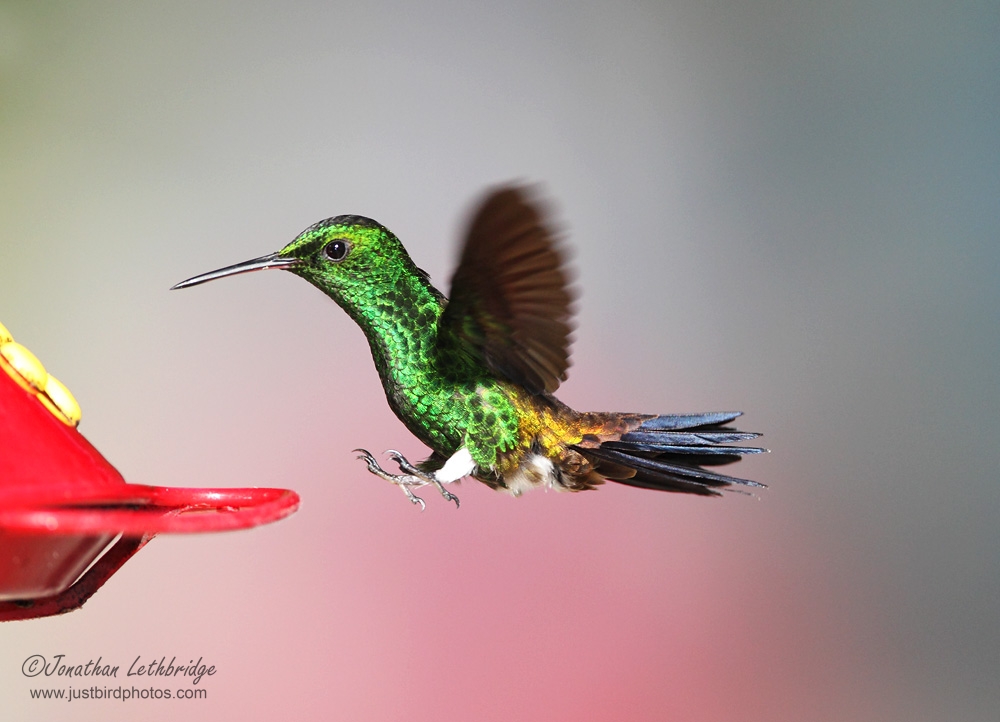 The most pleasing moment of the entire holiday was when I realised I had actually nailed the Rufous-breasted Hermit. The dominant species of Hummingbird is the Copper-rumped Hummingbird. These were constantly round the feeder. By contrast the Hermit came in three times in three hours, and each time was chased away by the Coppers. The first two occasions I blew it and was gutted. The third (and last) time, the gods smiled, and one single image, the one immediately below, was basically spot on. I was completely elated! I've seen a couple of photos on the web I think are better, in particular the work of Glenn Bartley, but without all the flash malarky, I'm more than happy. Ironically enough, one of the last bits of repacking I did was to remove a slave-flash, a venerable 430 EX, from my luggage on the basis I was taking too much stuff. How I wish I had ditched the macro lens - used about three times - and taken this instead. Next time, next time.... 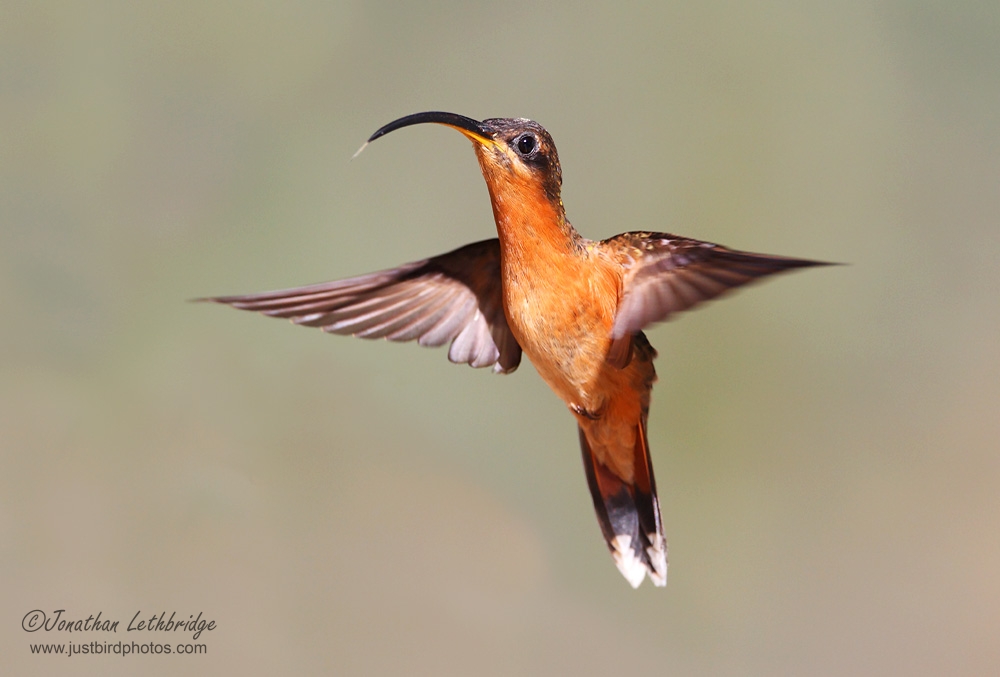 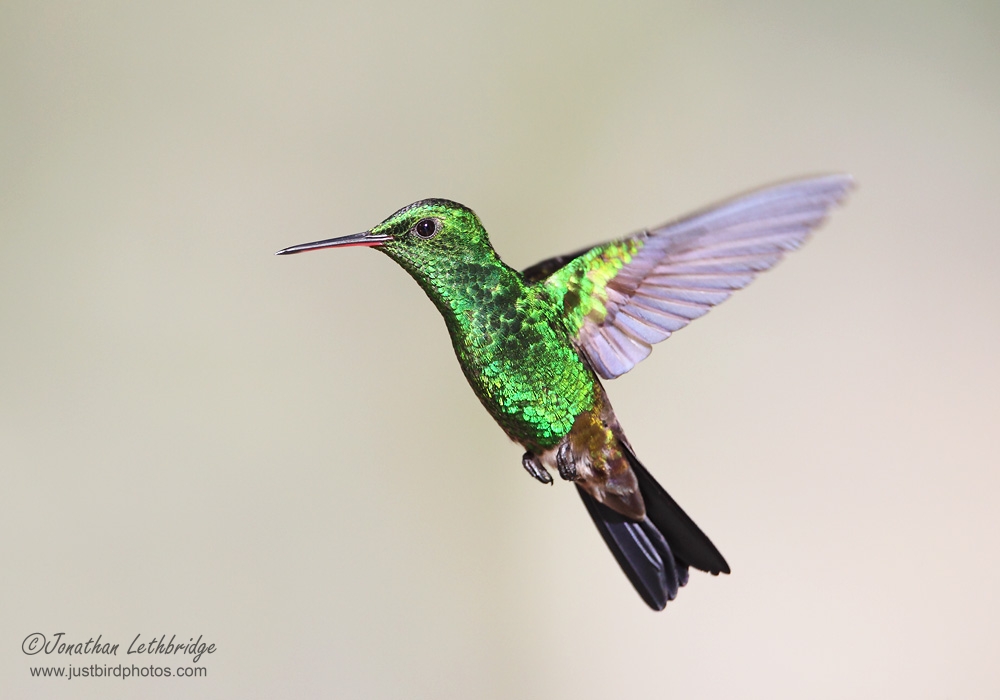 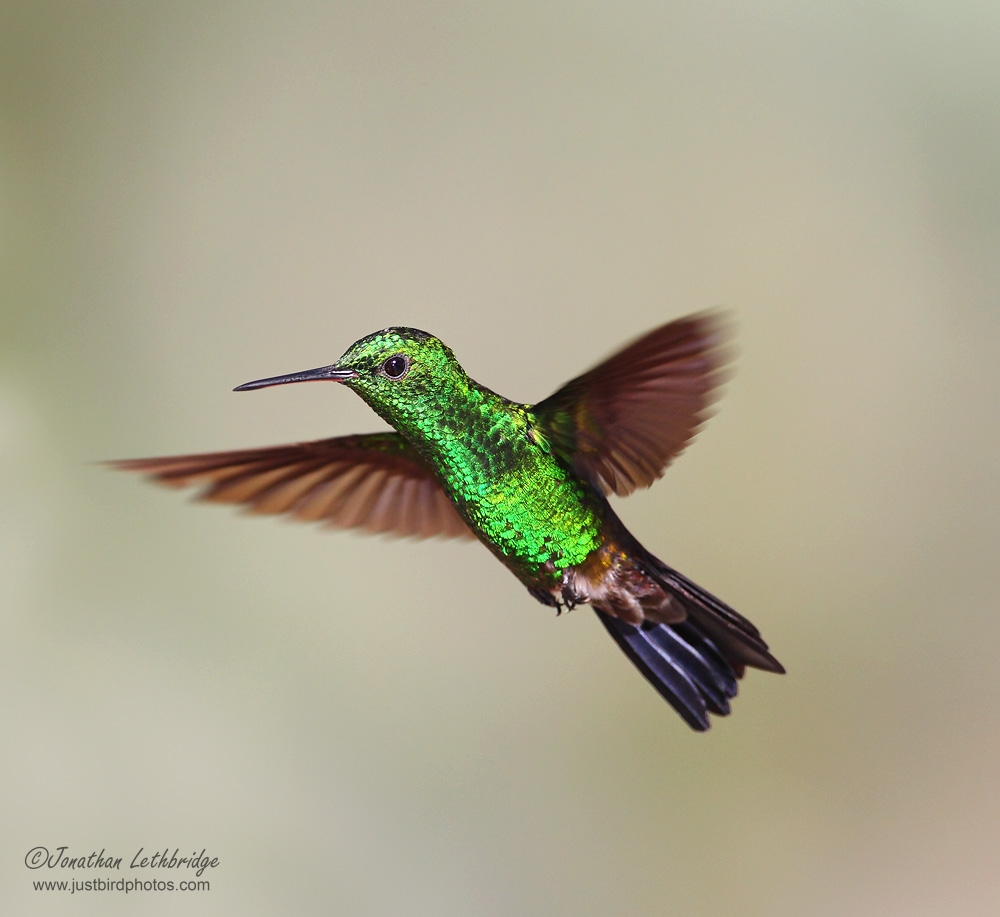 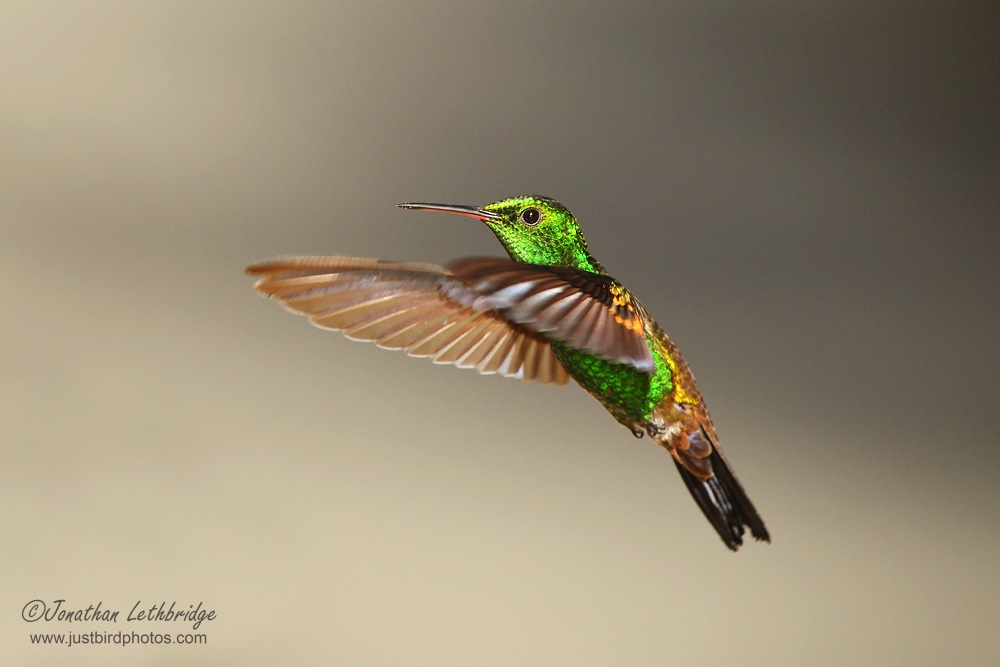 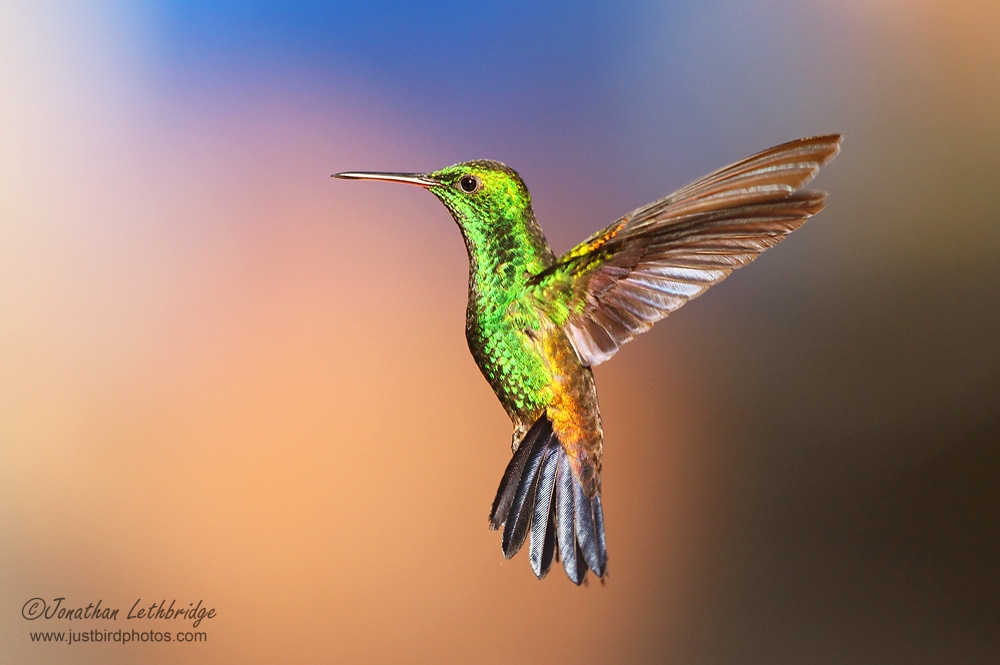 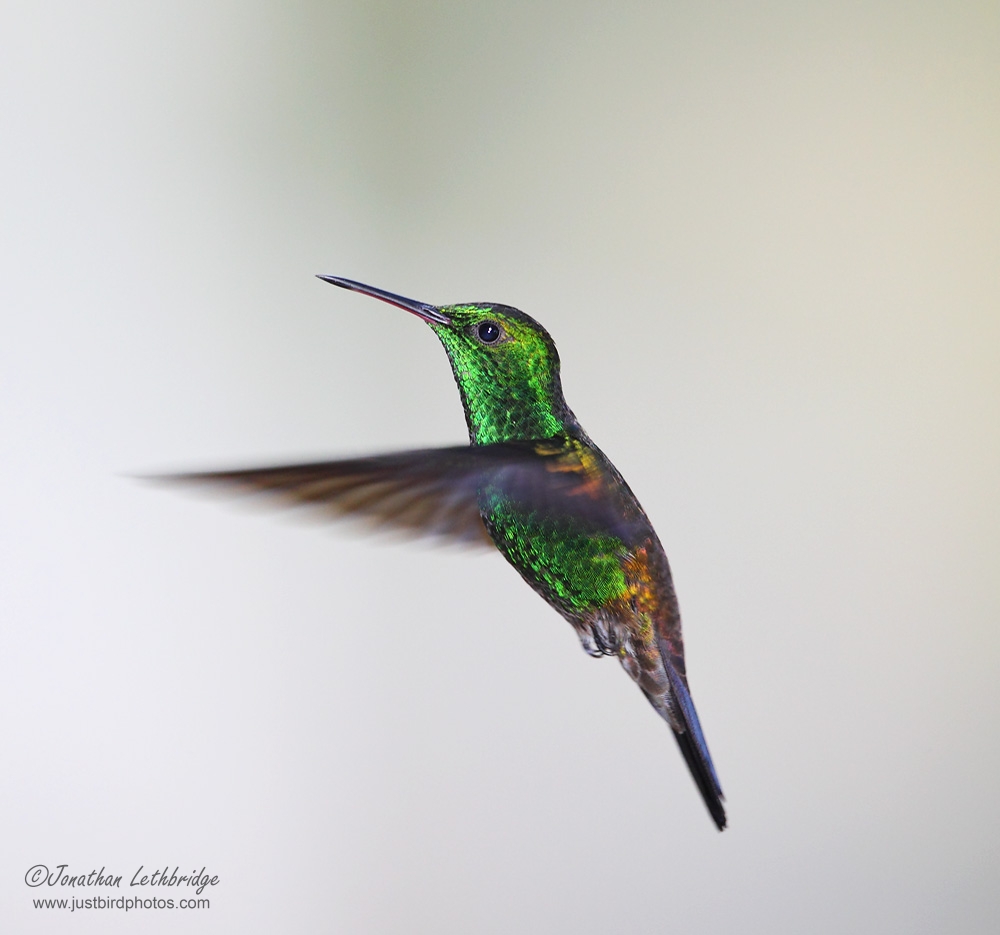