I never saw many Brown Pelicans, but when I did I often saw them spectacularly well. Typically there would always be one cruising up and down whatever beach I was on - the trick I never managed was being exactly parallel to the bird as it either dived or landed, but I had a lot of fun trying! They're enormous, so big that even I can manage to lock onto one in flight - as you may have gathered not exactly a forté of mine. I mostly concentrated on the waders on the beach, but when a Pelican came close I rose from my prostrate position on the sand, changed camera settings and had a go. Some of the images I really like, but as always I know I can do a lot better if I spent some proper time concentrating on them. The trouble with Florida is that there is too much to do.

As an aside a dear friend of mine, now sadly departed, used to call Pelicans Pelihonks. He was not much of a birder to be fair, and his ID skills were somewhat lacking, but during a long trip we took together up and down the East coast of Australia many years ago I gradually got him to at least start looking at them. Predator Budgie was his generic term for any bird of prey, but it is Pelihonk that has somehow stuck with me for nearly two decades - so much so that whenever I see a Pelican of any species I am immediately reminded of him. So here's to Pelihonks and great guy who went too soon. 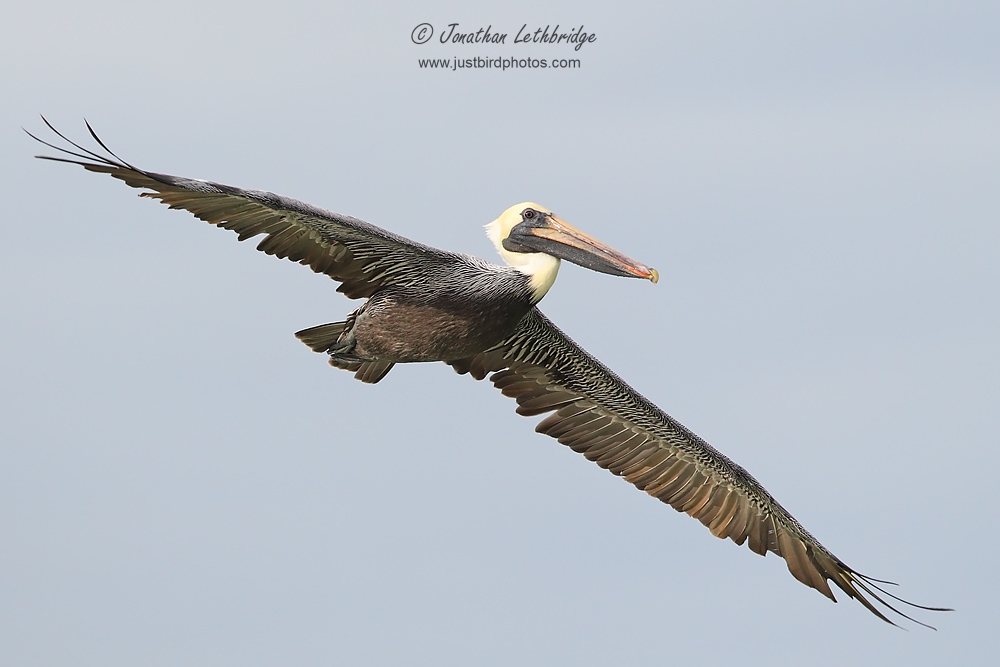 The image above reminds me of a 747 coming into land with flaps extended. They're actually quite nimble in the air despite their size, and like a Gannet can twist and turn at the precise moment to time their dive to perfection. I however had trouble timing my coordination to perfection, and did not manage a perfect dive shot. The image below is probably the closest I came.

All of the images above were taken on an uncharacteristically murky day on the Gulf Coast. On my final morning however the sun came out which made a huge difference. I probably already mentioned it but I was so unused to the brightness that it took me a long time to control my whites. Not that there is much white on a Brown Pelican, but on adults the neck can bleach out - as can be seen on a couple of these images. Not enough to worry me, but then bright whites seldom do!

Danial Luettgen(non-registered)
Brown Pelican is a bird that is very beautiful. I like the way it looks, and I also like how it looks when it flies. The wings of the bird are white with brown feathers on them, and the tail is white with brown feathers on it too. It's nice to see a bird that has its own unique color scheme. Visit this http://forums.janetscloset.com/showthread.php?tid=5243 site to buy best brown pelican birds. This is a very beautiful sight to see, because you can't see any other birds flying this fast in the sky except for these birds! It's also great because you can watch them from below in flight, which makes it easier for me to tell what kind of bird it is by looking at its wingspan.
No comments posted.
Loading...
Subscribe
RSS
Recent Posts
Skylark lockdown Pied Wheatear Paddyfield Warbler Cyprus Pied Wheatear fun Florida - Brown Pelican Florida - other Terns Florida - Royal Tern The Blue Zone Florida - Black Skimmer Florida waders - Sanderling
Keywords
Wheatear tit Desert Wheatear Redshank Whimbrel Stonechat cyprus pied wheatear Brown Pelican Royal Tern Black Skimmer
Archive
January February March April May June July August September October November December
© Jonathan Lethbridge/JustBirdPhotos.com
Powered by ZENFOLIO User Agreement
Cancel
Continue