Carrying a large telephoto lens in the field

I've finally found a comfortable way to carry my camera - this has only taken me ten years! I refuse - most of the time - to carry a bag whilst out and about. My style is all about birding with a camera, not going out on photo-only missions (though that has been known, of course). I've always struggled to carry what is quite a heavy setup (~6-7.5kg). For a while I used a Sco-pac, of the sort designed for Telescopes mounted on tripods, but then I discovered that it was stressing the seams, and anyway I don't like tripods. Abandoning that, I carried the lens hanging off my shoulder, with the camera mounted - note that I attached a strap to the lugs on the lens collar, and did not use the camera strap as this would apply far too much pressure to the lens mount. This was kind of OK, but 500mm (and longer!) telephotos with hoods attached are so long that this bashed against my knee as I walked, and also put severe strain on my shoulder, what with the weight being in a narrow plane. The taut strap rubbed against the camera body, and managed on two occasions to ping a button off the top plate of the camera, literally snap it right off. The second time it was the ISO button, and £195 later I decided enough was enough.

Finally I have the answer, though it is slightly Heath Robinson and requires a new lens foot. Here's what I used. 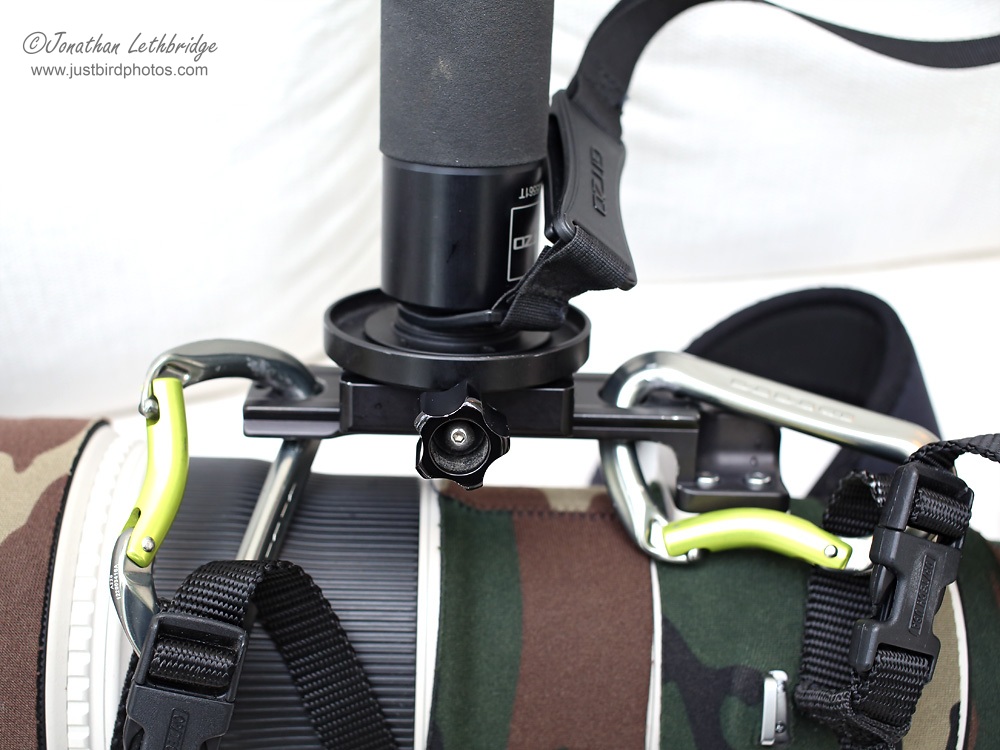 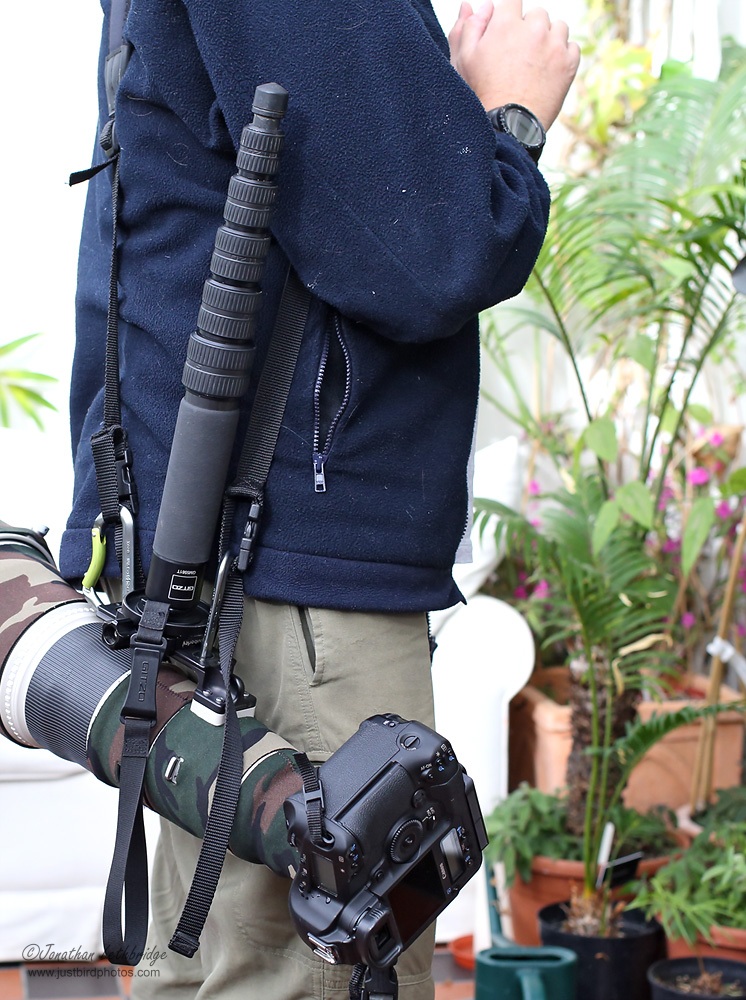 I can carry the setup all day long like this, it is brilliant. The camera and lens can hang either completely horizontally, or, as in the photo above, at a slight angle. Either is extremely comfortable, and leaves both hands free for binoculars or another camera. As you can see, there is enough room between the two carabiners to keep the monopod attached to the lens foot. The clamp is a Wimberley C12 screwed directly into the monopod; I don't believe in monopod heads. My monopod, a Gitzo GM5541T, is short enough fully retracted (as shown above) that it does not get in the way of my arms too much, and even when extended, it tends to point away from my body.

The "4th Generation Design" replacement lens foot is designed to reduce the centre of gravity of your rig, as well as shave several hundred grams off it - which is why it has the holes in. It's made of high grade aluminium, just like Wimberly, RRS and Kirk plates. It's nicely anodized, and my new set-up is scratching the hell out of it! Note that the lens has a neoprene cover, and this prevents any paintwork loss - otherwise it would be metal on metal, and whilst it wouldn't affect the lens at all, scratching and paint loss could easily impact its resale value. Anyhow, why more people don't use these replacement feet I don't know, presumably it's the cost and hassle of getting it sent from the USA, but the weight saving is great. I'd never heard of them  - when I bought my current lens it had one attached already - a happy discovery - and if I ever get any other long telephoto, I'll surely get one these feet for it - the Arca Swiss dovetail design is built in (see photo below), so that's the weight (and cost!) of a separate QR plate saved as well. They're made specifically for each model of Canon and Nikon lenses, you simply unscrew the original one and screw in the replacement one - easy.

The carabiners are real ones, beware of a lot of fake rubbish on the web and order only from a proper climbing shop. These were about a tenner each, and could probably hold me. They easily hold the lens. The OpTech tripod strap needs no explanation, they're used by birders the world over. The loops in the strap that would go around the collar of the tripod at one end, and round one of the legs at the other simply go through the carabiners. Note that these carabiners have a slightly irregular shape, this seems to help the rig hang in one place - they kind of have corners that the weight drops into. You could go for screw-gate carabiners for extra safety, but I like the flexibility of being able to quickly snap the strap on and off. When you're moving around with the camera and lens hanging from your shoulder, gravity ensures there is no possibility for anything to come unclipped. My only slight worry is that the OpTech plastic clips in the loops are a weak link. The strap capacity is far more than what I am using it for though, so my assumption is that I'll be fine, and indeed so far there have been no nasty incidents and close inspection of these clips once in a while confirms they're still rock solid. 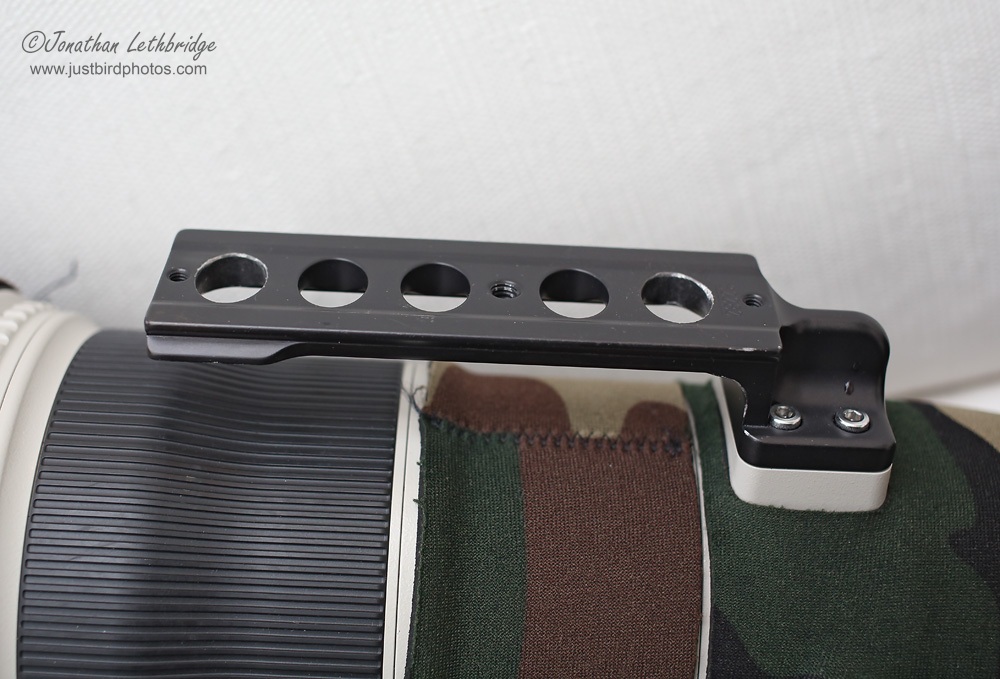 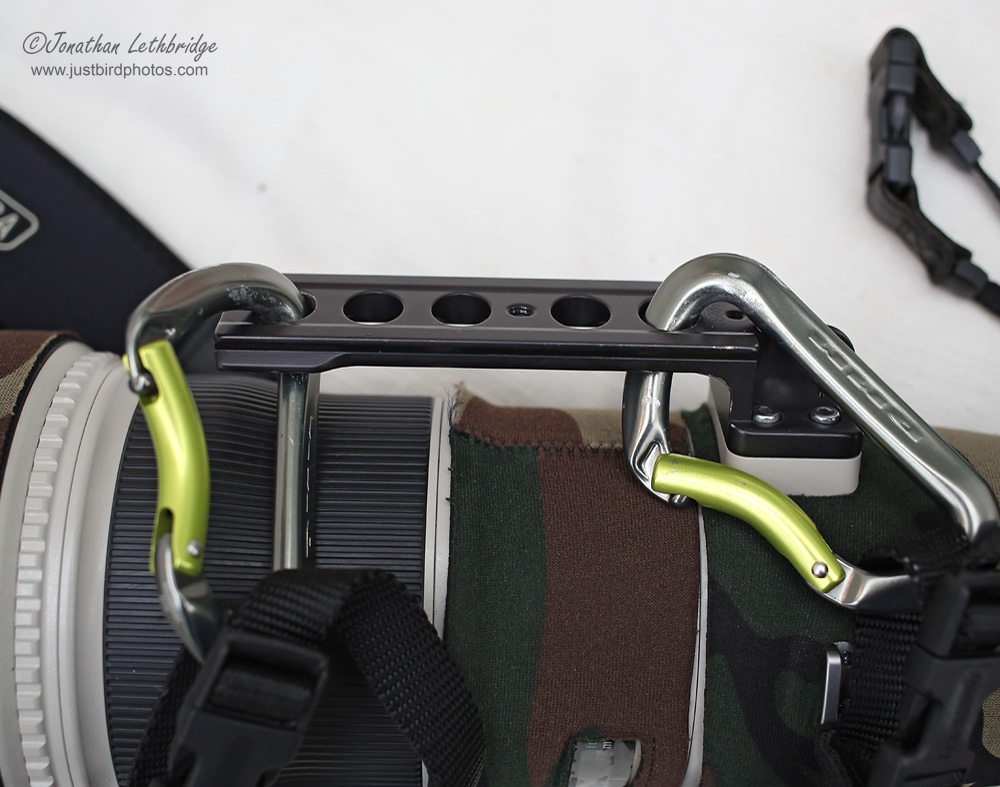 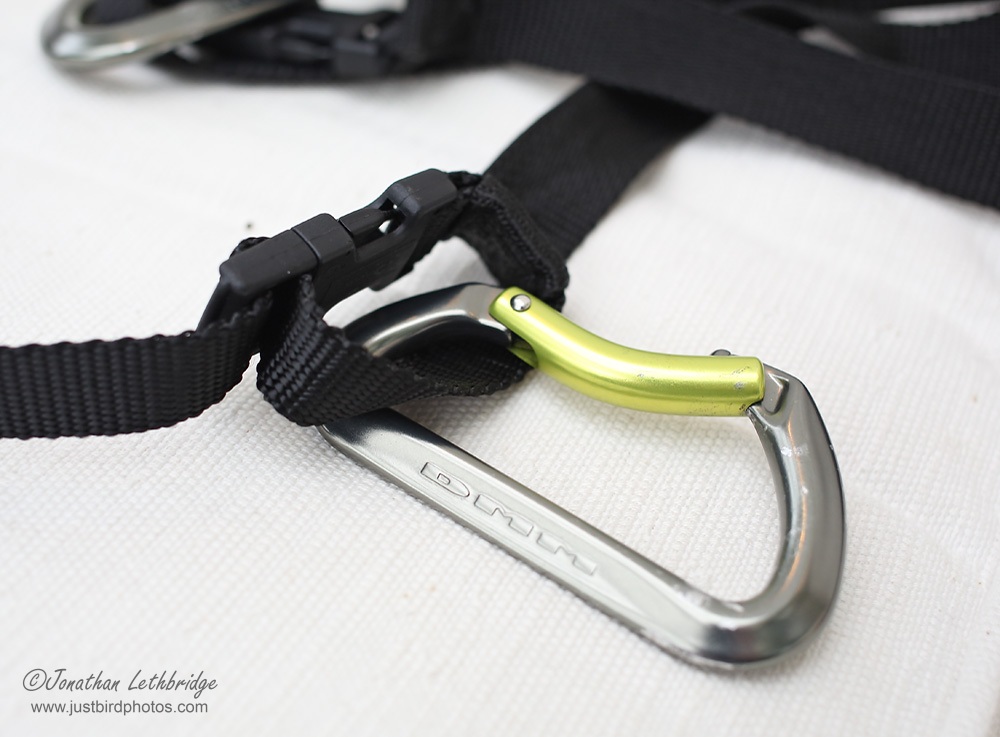 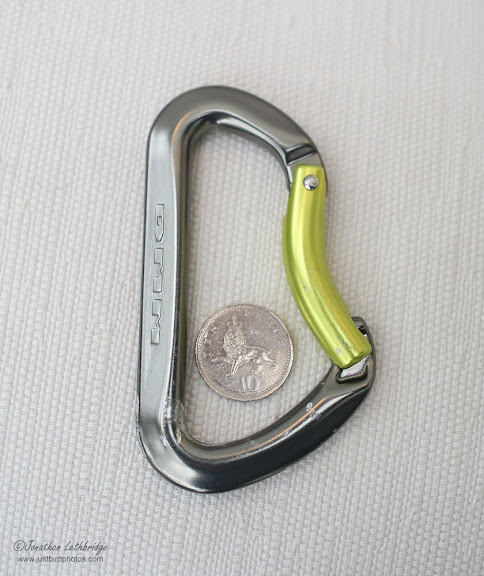 Robin L(non-registered)
Sorry, but this still looks a little dubious to me. You look as though you are relying on the 4 little screws, that hold the modified foot plate to the lens, to hold the combined weight of camera, lens and tripod/monopod. The foot attached to Canon lenses looks far more substantial than your arrangement and I would rather trust in that TBH. Big Nikon lenses have 2 anchor points on their lenses already, so wouldn't benefit from this idea. Can't help thinking that once that foot plate detaches from the lens you're left just holding the monopod on the strap! You have given me food for thought on thinking up a better idea though, so thanks for that.
ron mayes(non-registered)
This is a great idea. Thanks