I've just returned from Morocco, where a long weekend was spent purely in the pursuit of images. I wrote about the trip here, but deliberately kept it light on the details. I had no plan, and just followed smaller roads and tracks until I saw birds - if they were friendly I stuck it out, if I couldn't get close I moved on. On the whole (and when I stuck to it!) this plan, or lack of plan, paid off handsomely, and rarely was I short of subjects. It was interesting to note how birds seem to live together in small pockets, and then there is a blank area before another pocket. I guess is to do with habitat, water and food availability. 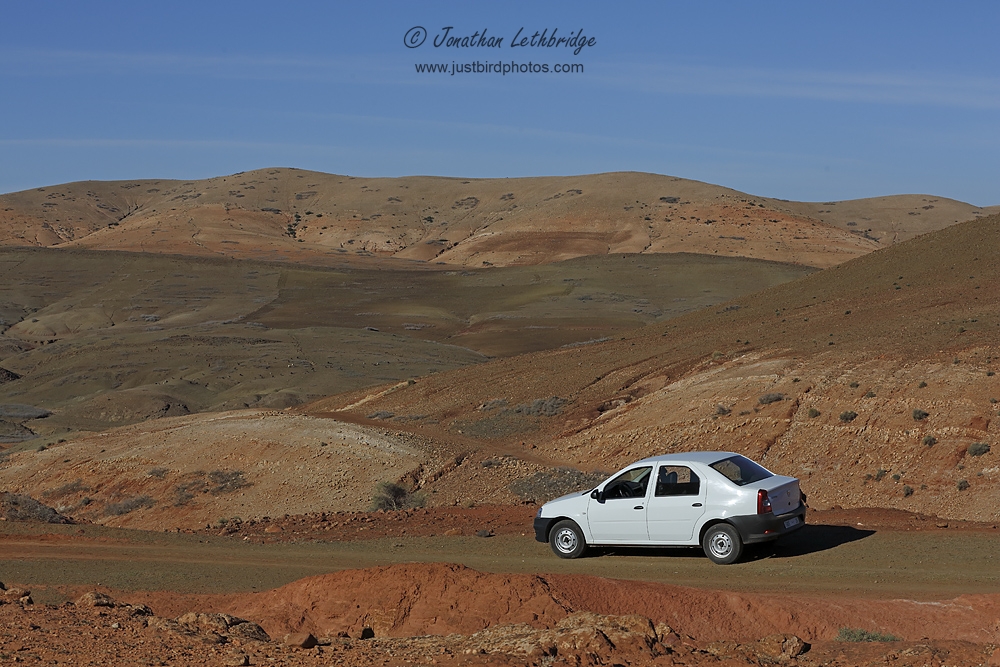 I flew to Marrakech with British Airways, hired a car from Medloc, a local company (22 EUR/day - arranged in advance from the UK), and stayed at the clean and comfortable Hotel Le Coq Hardi in Ait Ourir, where a room, dinner and breakfast set me back about 25 quid. Bargain. Driving is interesting, but if you're sensible and slow it's easier than it first looks. At no point in the trip was I further than about an hour from Marrakech by car, perhaps 60km, but it felt for the most part as if I were on a different planet. Speaking french is a big plus, but probably not essential, and I found that being polite to local people and taking time to speak to them and their children paid dividends. Once you get into the backcountry, people cease wanting to sell you stuff and just want to know what you're doing - my advice from personal experience is simply to steer clear of the tourist areas like the Ourika Valley and Oukaimeden, and instead go off the beaten track. It's a great destination, and you could easily come away with a ton of good images in just a weekend - I may attempt just that later on this year.

I took the 1D Mark IV body, the 500mm lens and both converters, as well as full tripod set-up and my monopod. As I was by myself, I ended up with the tripod set up in the front seat (one leg in the footwell, one near the handbrake, the other out horiztonally into the door frame - see photo) so that I could gently roll up to roadside birds and start papping. When I left the car in search of birds I simply took the camera off the wimberley and popped in on the monopod. Most images were taken outside the car, but the "drive by" is still an effective method of getting close to some individuals, even in a bright white car! Other lenses taken but only lightly used were 16-35mm and 70-200mm zooms, with a 5D Mark III body which was also intended to serve as a backup should the worst happen with the 1D. All of this went into the Guragear Kiboko bag no problem at all, along with a whole pile of gubbins like spare batteries, cards, chargers, a rocket blower. As usual I took far too much, I was so busy taking photos of birds that the other lenses barely got a look in - lesson learned for next time! 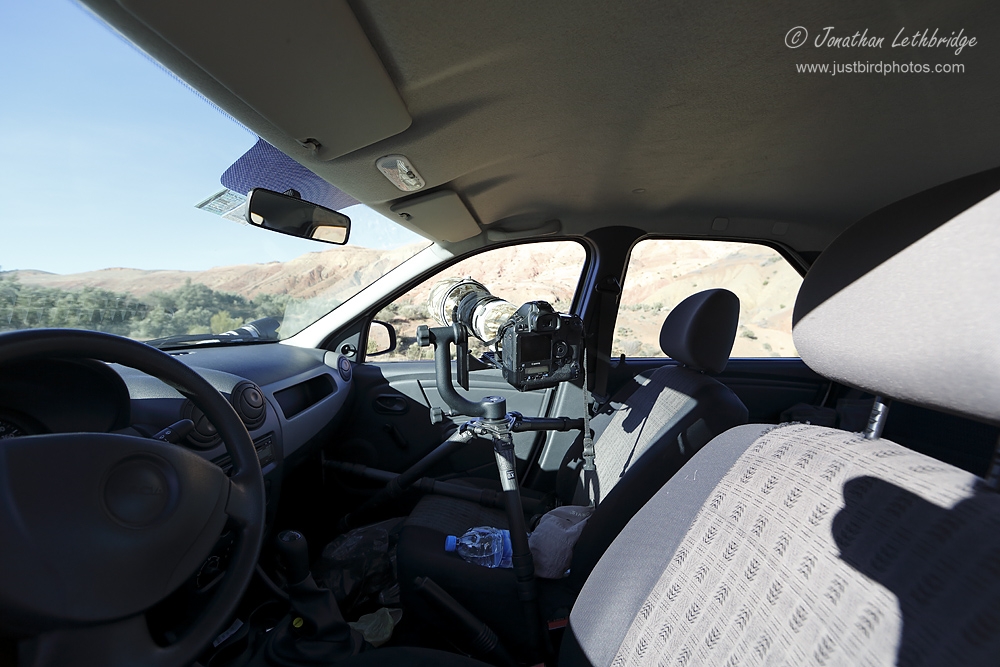 The majority of the time I used the 1.4x converter, but some birds were so accommodating that this wasn't necessary. The 2x converter didn't come out of the bag! The light in the morning is brilliant from about 8am until 10.30am, at which point it became a bit harsh. It was at it worse probably at around 1-2pm, but it remained harsh probably until about 3pm. During this period not only was the light a bit tough, but the heat (20+ degrees even at the start of January) made accurate focusing and sharp images very difficult. If you could get very close you were OK, but I'd imagine that later in the year even this would be impossible. I tended to either rest up or do a bit of driving around in the middle of the day.

With the light being so intense and constant, I worked in manual the whole time and was able to get shutter speeds all the way up to 1/6400th of a second. Generally I used this to get decent apertures of f8 and beyond, and so a typical speed was 1/1600th. When you get very close to birds, you need a lot of depth of field, I think f13 was used on a couple of occasions - a far cry from the UK! This was one of the reasons I went - the forecast at home was absolutely dire, whereas Morocco looked incredible, and I only booked it about two weeks before I travelled. Sure enough, winter gales ruined the whole weekend in the UK whereas I was wandering around in short sleeves.

In addition to excellent birds and very few people to spoil your enjoyment of them, Morocco is such a sparse country that you can generally always find a situation which has the potential for very simple backgrounds of the type I love. Rocks and thorny bushes are often favourite perches, and you can blow the backdrops to pieces as there is simply nothing there, even when stopped down a lot. And the colours....wow! Every shade of red and orange or beige you could dream of. Bright blues and olive greens. Personally I love this kind of simple image, and it's a reason I'll keep going back there.

On the trip I was birding as well, and so clocked up over fifty species, but took images of only about ten. I'm going to do a post per species of the best of those - Great Grey Shrike, Thekla Lark, Black Wheatear, and to start with, Moussier's Redstart. Here's a taster. 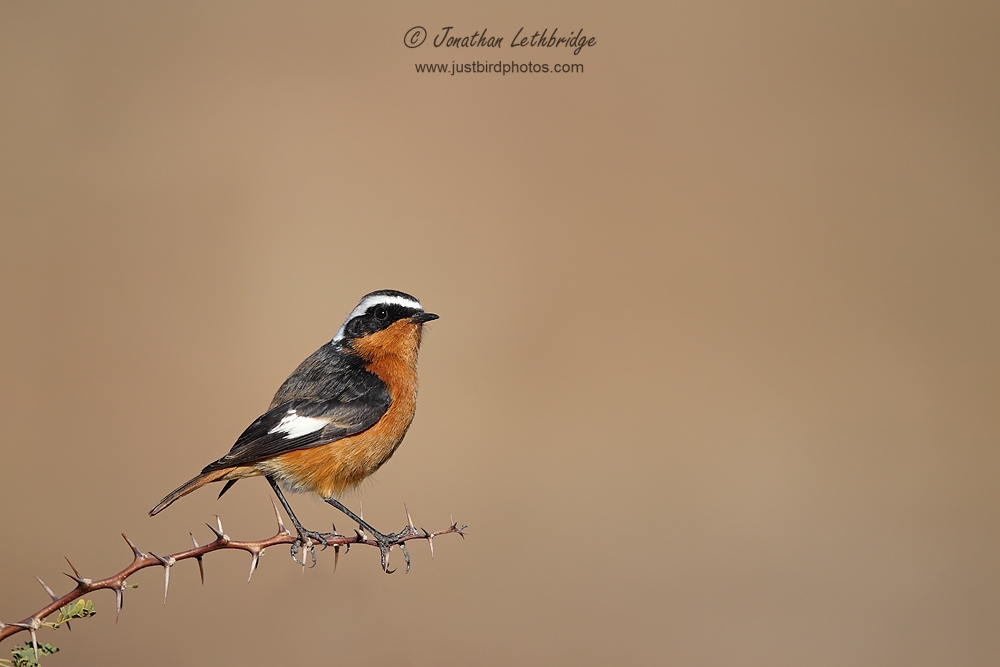