All the gear, some idea

I had a comment recently over on my other blog. It was a comment that was very complimentary about some photos I had taken, and it annoyed me a great deal. Here's why. Following on from the high praise was this - you must have a very expensive prime lens. Ah, you see, that's not the right thing to say, at least not to me. They went on to say that their attempts with a different, less-expensive but still pro lens, hadn't delivered results that were as good. I went and checked, and they were spot on. So what is being said here exactly? That the reason my photos are sometimes good is because I have an expensive lens? That therefore if all people had expensive lenses that their photos would all be good? What a load of rubbish! I see heaps of people in the field with large expensive lenses, all the gear. When I get home I sometimes look some of them up. By far the majority, and this is no exaggeration, have with all that gear taken a pile of complete garbage fit only for the trash. It ain't the lens, and it ain't the camera. Dear commenter, do you know what it is? Don't get me wrong, the lens helps, a camera with a great autofocus system helps, using support helps, but without a competent photographer at the other end of it who knows how to use it, none of it is worth a thing. And that is what people sometimes fail to grasp, and that without fail annoys me. Would you compliment a chef on a lovely tasty meal, and then tell him he must have a great cooker? No. Would you remark that an artist must have wonderful brushes? No. I'm not claiming to be a top-notch bird photographer, but I am claiming that I'm competent. And that's the important part. I'd be willing to bet money that if I swapped gear with any person who said the reason I got better results was because I had a better lens than they did, that with very few exceptions, perhaps none, I'd still take the better photo. That's because I have practised for hours, I have abused shutters like you would not believe. I understand exposure theory, I know what a histogram is, and I know my camera like the back of my hand. My camera has 45 focus points, I use one. It has several exposure modes. I use none. I know what angles can deliver the most pleasing images, I get low, I use a monopod for support with speed and flexibility, I spend hours with a single subject. I get wet, I get cold, I get uncomfortable and I walk miles. And sometimes I come home with NOTHING. If I do get something worth keeping, I work on it on the computer for ages. Hours in Breezebrowser, hours in Photoshop. Tweaking, cropping, cloning, learning. Learning all the time.  These are the reasons why the images look good, not because I also happen to flog my guts out in the City and can therefore afford top quality kit. So to anyone that thinks the reason their images don't stack up is because they don't have the gear, whatever you do don't go out and buy it all, as that's not the problem. Rant over. 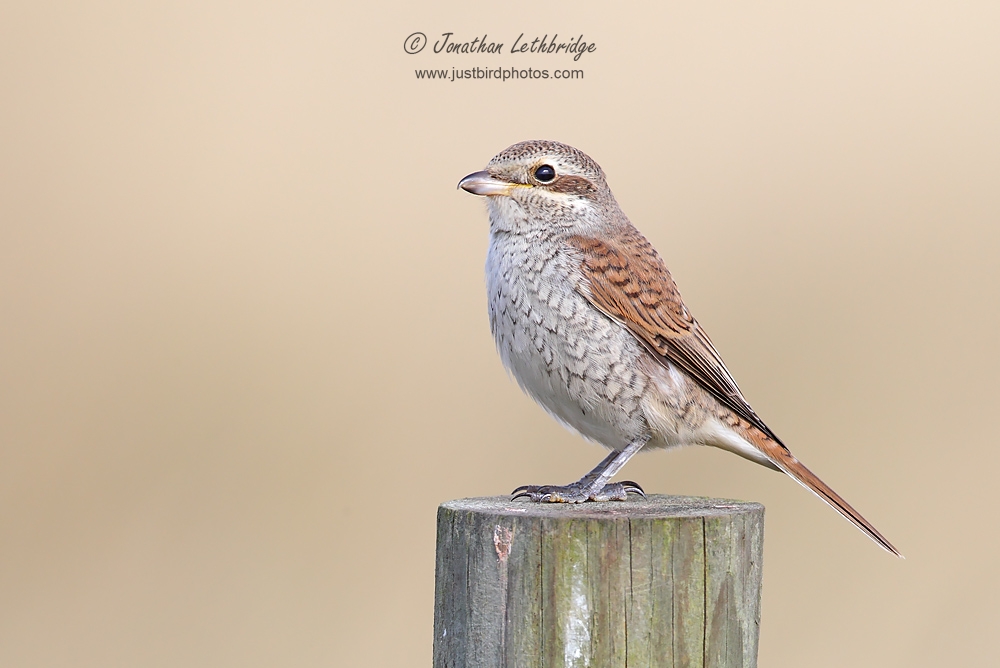 Jerry(non-registered)
Brilliant rant! The kit always makes it easier (if not why would we save for that white lens) but your technique, not least with a monopod, shines out! Looking at your blog I was at one "twitch" with you, the QMR BBP, at a site I know well and you took some great pics (better than mine - and I teach photographic technique!) so you rant away :)
No comments posted.
Loading...
Subscribe
RSS
Recent Posts
Skylark lockdown Pied Wheatear Paddyfield Warbler Cyprus Pied Wheatear fun Florida - Brown Pelican Florida - other Terns Florida - Royal Tern The Blue Zone Florida - Black Skimmer Florida waders - Sanderling
Keywords
Wheatear tit Desert Wheatear Redshank Whimbrel Stonechat cyprus pied wheatear Brown Pelican Royal Tern Black Skimmer
Archive
January February March April May June July August September October November December
© Jonathan Lethbridge/JustBirdPhotos.com 2007-2017
Powered by ZENFOLIO User Agreement
Cancel
Continue